The Unity of Nature: Alexander Von Humboldt in the Americas 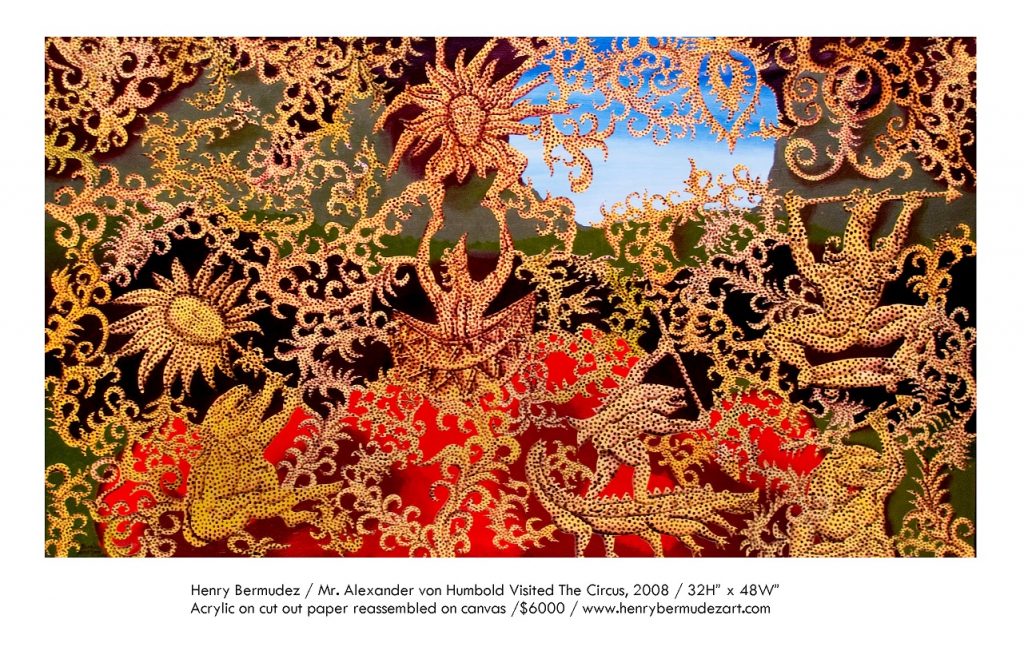 Curated by David Acosta, Artist Director at Casa de Duende, The Unity of Nature celebrates the birthday of the German polymath through the work of five artists. The exhibition uses photography, video, sound, performance, painting, sculpture, and photography to pay homage to Humboldt’s travels in the Americas, including a stop in Philadelphia in 1804.

Humboldt’s five year trip through Venezuela, Colombia, Ecuador, Cuba, and Mexico was a watershed journey that allowed him to develop his theories on nature not only as an interconnected system but also on humankind’s  destructive impact on the environment, theories centuries ahead of their time and which are now currently accepted as humanity faces global warming and environmental devastation. The five artists represented in the exhibition come from the countries Humboldt visited during his five-year journey:

Venezuelan born artist Henry Bermudez will display part of a series of large panels honoring Humboldt. Henry’s large, complex, and detailed drawings and paintings pay homage to nature,flora, and fauna through a unique visual lens that incorporates representations of nature and the landscapes of his native Venezuela; work into which he also incorporates the religious and mythical syncretism of the communities that live there.

Pedro Ospina (Colombia)
Colombian born sculptor Pedro Ospina will create a site-specific sculpture made only of organic materials honoring the Delaware River by focusing on the creation of a totemic sculpture embodying the three clan animals (the wolf, the turtle, and the turkey) of the Lenni Lenape people for whom the River is named. The focus on the Lenni Lenape also acknowledges and pays tribute to the indigenous religious, spiritual and intellectual thought, which views nature as an intricately interwoven system where everything is connected.

Salome Cosmique (Colombia)
Salome Cosmique (Colombia) in her performance Pachamama, Colombian performance artist Salome Cosmique pays homage and tribute to the Leni Lenape people through the invocation of the Andean earth mother Pachamama. Using sound and video, the performance explores Pachamama’s totemic power over all living things to which she is intrinsically connected. Through, movement, ritual, and song, the performance will emphasize our own connection to the earth through the weaving of a web, paying homage to Humboldt’s idea that all things are interconnected and that whatever we do to one thing we do to the whole.  Man does not weave this web of life. He is merely a strand of it. Whatever he does to the web, he does to himself. Chief Seattle.

Rebecca Martell (Mexico)
Mexican born photographer Rebecca Martel’s work, titled Desifrando/Deciphering, will focus on a series of color photographs inspired by Humboldt’s travels through the indigenous regions of Mexico, focusing specifically on Mayan cultures and the impact these civilizations had on the German explorer whose humanist views extended to his respect for and admiration for the indigenous peoples he encountered upon his travels. For this exhibition, Martel’s photographs will explore the forms and places of the Yucatan.

The sound pieces will fill the space, exuding within the setting an experiential state of being and the emotional quality, (not as observed), but as felt and imagined from the perspective of Von Humboldt during his travels from Puebla, Mexico to Philadelphia, capturing both the oceanic sounds at sea, and the sound of the winds of arrival. The piece pays tribute to Von Humboldt the naturalist who emphasized not only the harmony and beauty of nature but also spoke of the ecology that is our expanded physiology.

Free and open to the public.
Dogs on leashes are welcome.
Wheelchair accessible.
Cherry Street Pier is a smoke, vape-and tobacco-free zone.